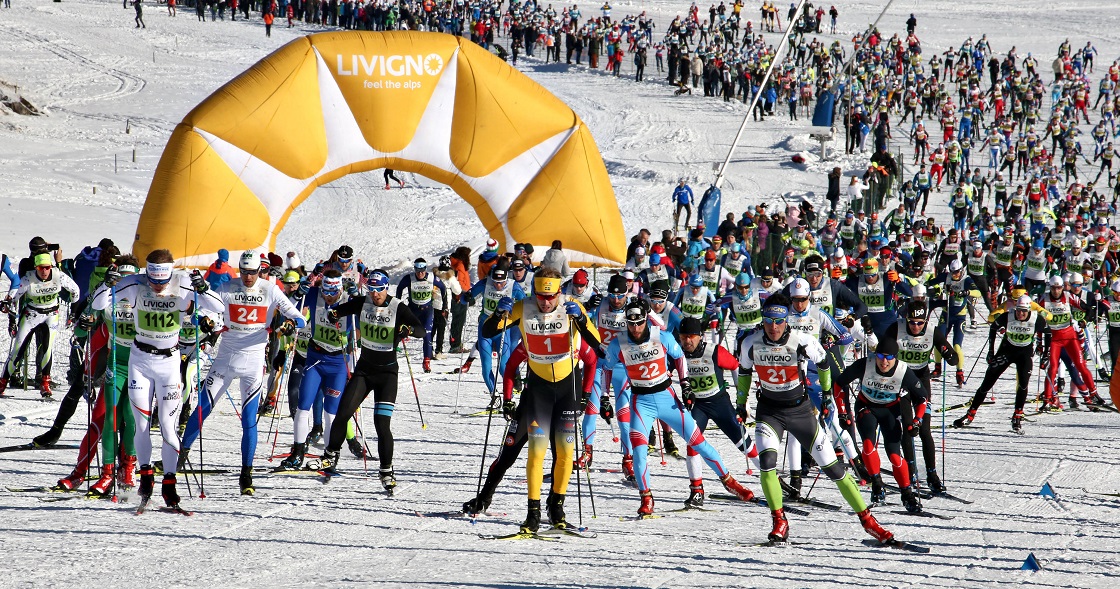 Parade of shimmering metals in Livigno, even in today’s appointment dedicated to free technique and amateurs, scheduled between the two Visma Ski Classics races. Today in Livigno the 29th “Sgambeda” went on stage, a legendary appointment with cross-country skiing in the “Little Tibet” and one of the first seasonal appointment, thanks to the local Organizing Committee, able to set up a track of 30 km in a period where the snow is missing everywhere.

The victory went to the Norwegian, world gold medal in the relay, Anders Gløersen, ahead of the Swedish Viktor Brännmark and the athlete from Alto Adige Julian Brunner. Among the women, great success for the Olympic champion Anna Haag (Swe), the Czech Klara Moravcova and the Swiss Nicole Donzallaz. A beautiful day in Livigno, with a temperature about zero degrees and the sun to illuminate the impeccable track, where more than 600 athletes started, surrounded by an enchanting landscape.

To create the gap, at least initially, has been Emil Jönsson with the bib number one, husband of Anna Haag, Swedish, four Olympic medals and four World medals for her, but after few kilometers to take the reins of the competition has been another multi-titled athlete. We are speaking about Anders Gløersen, two world medals in addition to nineteen podiums and eight World Cup victories, not an ordinary athlete.Ten kilometers and the Norwegian is pursued by the Swedish Viktor Brännmark, the only one to keep up with him, with the two that alternated until the end surprising the spectators with a great final sprint.

Gløersen’s resistance paid off, finishing just few centimeters in front of his opponent: “Very beautiful race, Viktor and me made the gap after about ten kilometers, going together until the end. Happy to have been the number two on the last climb and the first to the finish line. I tried to close the race with a bang, even because I manage the use of energy pretty well”. Satisfied the Swede despite the second position: “5 or 6 km and we ran away, I gave everything on the last climb, but Anders defeated me on the final sprint. The track was really beautiful, with perfect conditions “.The battle for the lowest step of the podium was also exciting, and to give a touch of Italian spirit was the South Tyrolean Julian Brunner: “I’m surprised, I thought I would have been more in trouble but instead I got a good time. Spectacular track “.Fourth position for Alan Martinelli, coming from Valtellina, ahead of two positions Thomas Bormolini from Livigno, this time “orphan” of his twin brother but for a specific reason: “I did well with skating, in Livigno is always nice to practice it together with the two fight-mates Alan Martinelli and Christian De Lorenzi, my twin brother is currently in Lillehammer working as a coach of the Italian team, he is making a new experience and I wish the best to him”.

The champion Anna Haag make an incredible solo performance, and arrived together with her husband, who by choice or for love, apparently renounces to challenge with his males colleagues, much better the company of his wife till the finish line: “Winning is always nice, I still don’t know if I will be at the starting line tomorrow in the individual race of Visma Ski Classics, we enjoyed these two wonderful days in Livigno. Congratulations to everybody “. More distant the Czech Klara Moravkova, author of a good race: “Quick challenge and perfect conditions to compete”, while the third classified, the Swiss Donzallaz, was initially penalized by a fall and then she recovered quickly.

The undersecretary for sports events of the Lombardy Region and Olympic canoeist Antonio Rossi was also present, and awarded the athletes: “La Sgambeda is a great sports event and we really believe in Livigno as a venue for the Olympics. This is one of the first ski track and cross-country and biathlon athletes choose it for their altitude training. I should also start to train hard in view of Marcialonga (also part of the circuit Visma Ski Classics), where I will compete in a relay race together with other Olympic champions such as Cristian Zorzi, Paolo Bettini and Jury Chechi”. Tomorrow in Livigno Individual Prologue Visma Ski Classics, at 9.30 (women) and at 11 am (men), at the end of a spectacular cross-country ski triptych in the “Little Tibet”.